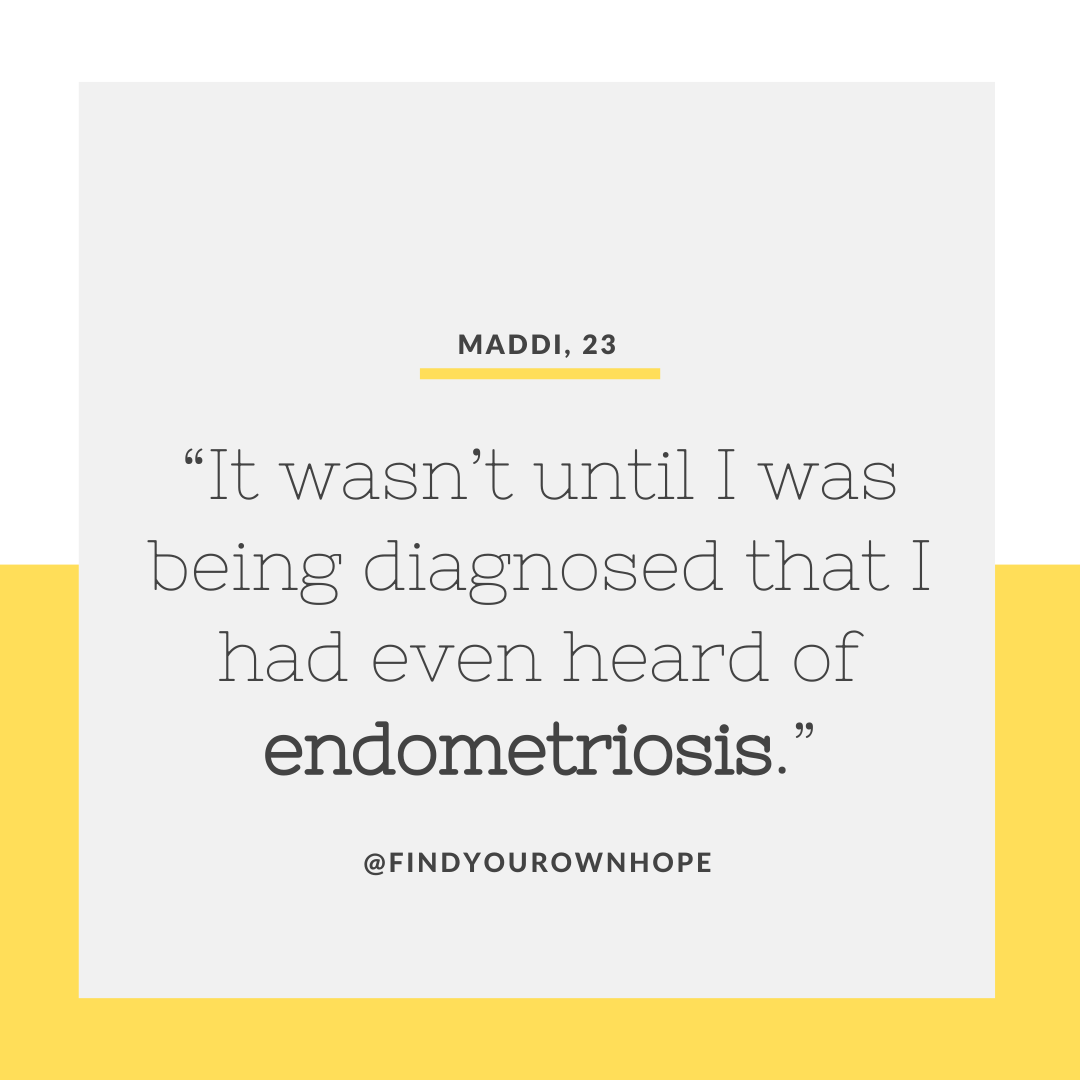 Endometriosis Awareness Month is now coming to a close but how could I let it end without sharing a post on my blog? If you follow me on instagram @findyourownhope, you’ve probably seen awareness posts throughout this month … but I have also been busy advocating for endo in other spaces online. I wrote two articles to try raise awareness and understanding for the illness.

I had to wait 8 years before I received a diagnosis but I hope this will decrease for others as more awareness is out there. BUT the only way it will is if more people know about the illness! So thank YOU for taking the time to read and educate yourself on it today – you are amazing!!

Today I want to share with you the article I wrote for FYA. This article was originally published on the newsroom at the Foundation For Young Australians.

Why We Need To Talk About Endometriosis

I was taught very little about women’s health in school or by doctors. So naturally, when I was struggling with my periods I found it extremely difficult to talk about because it felt like a taboo topic.

Maddi, 23, says, “It wasn’t until I was being diagnosed that I had even heard of endometriosis.”

When I received my diagnosis at age 21, I welcomed it with a mix of emotion. I was heartbroken, angry and so relieved. Heartbroken that I had ignored and normalised my symptoms for so many years; angry that I was never heard and my diagnosis had taken eight years; relieved that there was a reason I felt the horrible way I did.

This lack of awareness is all too common and majorly contributes to the long seven-to-12-year wait that women face for a diagnosis. We need to start talking about it and set the story straight.

Endometriosis is an invisible illness in which tissue that is similar to the lining of the uterus grows outside of it and in other parts of the body.

It has been found to impact the lives of more than 10% of Australian women. The illness has no cure and can impact women’s daily lives and their whole body’s function, not just when they have their period.

QENDO states that although some level of discomfort with periods may be normal, pain that stops women from living their daily life is not.

What are the symptoms?

Symptoms and pain levels of endometriosis vary from person to person. Although some women can experience this illness with minimal symptoms, the most common include heavy bleeding, painful periods, fatigue, headache, backache, cramping, constipation, diarrhoea, bladder problems, nausea, vomiting and painful intercourse.

“When you don’t look sick… the world treats you differently. You aren’t shown much consideration and more often than not, people accuse you of faking it which can take a massive toll on you mentally.”

The debilitating symptoms of endometriosis have a significant impact not only on women’s health but their lives, work, study, relationships and more.

For Eliza, 37, endometriosis means, “missing events, not replying to friends, dropping out at the last minute, lying about why…and putting off further studies as I don’t want to commit to something without knowing the future for me health-wise.” And for Angelique, 21, it means, “trying my best to avoid making plans with anyone because of the pain.”

Another young sufferer, Jasmin, 23, can only work casual positions because she needs to take days off regularly. Similarly, Jasmine, 24, used to work and study but had to give it up due to endometriosis and the pain she experienced. She says: “I would be crying every lunch break trying to get through the day… it just got too much for my body to handle so I had to quit.”

On a bad day, Eliza would feel like a burden to her loved ones. Jasmine also shared the effects endometriosis has on relationships: “My ex-husband left me due to my illness which was difficult… I have since got remarried and endometriosis still makes it hard, but I luckily have a very supportive husband now.”

Misinformation and not being heard

Doctors being misinformed about the illness and dismissing women’s symptoms is all too common. Eliza, Jasmine and many others experience long and painful journeys to diagnosis. While endometriosis is a condition that can start in childhood, it often remains undiagnosed and unaddressed until adulthood.

“The amount of doctors I have been to who have just palmed me off, haven’t believed my symptoms… or made me seem like a drug seeker and said it was ‘just a period’ is ridiculous. Some doctors have had clear as day results in front of them and still second-guessed me.”

Like me, many suffer symptoms young but go undiagnosed for years. Eliza started having symptoms at 14 but wasn’t diagnosed until 25, when she realised her four miscarriages at such a young age were not normal. Jasmine’s symptoms also started at age 11 but she “had to push for a laparoscopy” and finally received a diagnosis at age 22.

Lack of awareness and education

Angelique, 21, says education “would have helped with the initial process… because I felt very alone in what I was dealing with and thought maybe I was overreacting.” When Jasmine was at school, she says, “We were always taught period pain is normal and is a part of being a woman.” Eliza says, “When it came to my own body, I had no idea, I was frightened and didn’t ask any questions.”

But Mimi believes “education should be more widely available relating to women’s health concerns as this will save a lot of time, fear and pain.”

Despite all I have battled through with endometriosis and my struggle to be heard or even believed by doctors, I‘m glad I never gave up hope. At times it was easy to second guess myself and my symptoms but I’m thankful I listened to my gut, did my own research and backed myself because it finally led to some answers.

Thank you very much taking the time to read about endometriosis today. I hope you are all keeping safe during this crazy time xx

10 thoughts on “Why We Need To Talk About Endometriosis” 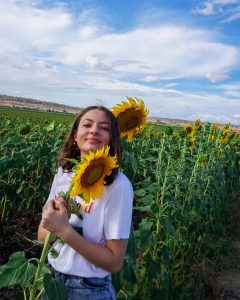